The Alternative Facts about Fraud Prevention 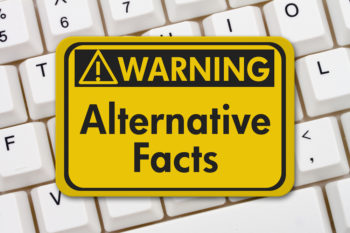 “It wasn’t me” is perhaps the most dreaded phrase in online commerce. It’s the foundation from which friendly fraud chargebacks are borne and it leads to over $11.8 billion in losses for card-not-present (CNP) merchants annually. The biggest question on most merchants’ minds is “How do I prevent friendly fraud?”

Fraud has been on the rise, costing merchant $2.40 for every dollar of losses (including fines, fees, chargeback costs and lost merchandise).

Friendly fraud, in particular, has been a bane for online merchants, who often have little recourse to a customer who cries wolf.

While brick-and-mortar stores have long felt the pains of shoplifting, some ecommerce merchants are just now becoming aware of digital derivatives of this tried and true method of theft take shape in the online channel. It’s been a costly lesson.

Is the Customer Always Right?

Friendly fraud takes several forms. In some cases, it’s a simple case of misunderstanding. A member of the household may have made a purchase without sharing that information with a shared account holder. A wife buys a new watch online and her husband, ever vigilant about checking monthly statements, calls fraud when he sees an unclear billing descriptor attached to what he thinks is an unauthorized charge.

It’s inconvenient, but it happens. Merchants can prevent friendly fraud instances like this by updating billing descriptors to be clear and recognizable. Merchants should always include their phone number and DBA, where possible. To be extra covered, some merchants enlist the services of chargeback prevention efforts, who employ methods in concert with issuing banks to directly resolve such disputes directly with customers rather than trudging painfully through the entire chargeback process (and the ensuing fines and fees).

In other cases, customers purposely set out to steal from merchants by denying they receiving goods they actually did receive, or by claiming the purchase was not authorized even though they knowingly authorized the order at the time of purchase. It’s digital shoplifting and it’s more prevalent than ever.

This spike is, in part, due to the rollout of EMV chip & PIN technology, which is working toward eradicating in-store fraud. The chip technology enables dynamic authentication, making it more secure than the traditional mag-stripe cards. By asking customers to enter a PIN in addition to inserting their chip-enabled card, it’s adding in an extra hurdle for fraudsters looking to use stolen cards.

This in-store payments evolution has pushed fraud to the less-secure online channel, where more vulnerabilities exist. With friendly fraud, it is easier for consumers to make the case that they weren’t the ones to make the purchase. Depending on the security and authentication measures the merchant has in place, it may be impossible to prove that the cardholder was the one to make the purchase. The veil of a computer screen makes people bolder in the tales they’re willing to tell – and it makes it harder to prevent friendly fraud.

What’s more, the consumer is protected by the issuing bank, which usually covers the cost of any fraudulent charges and issues the merchant with a chargeback. That chargeback includes the cost of goods as well as additional charges. Too many chargebacks and a merchant can face real trouble with the card associations, including laddered fines and fees.

Merchants need to get smart about how they manage chargebacks and prevent friendly fraud. Effective fraud prevention is often a labor-intensive process, which many smaller merchants simply can’t staff for. Working with a specialized merchant account service provider that understands the CNP space can ease some of this burden. This type of partner can advise on a tailored fraud prevention plan that fits the business like a glove – not too loose, and not too tight. The key here is balance. You want to stop bad orders from getting through without prohibiting legitimate purchases. It’s not an easy feat for a merchant to handle alone.

Finding the right partner can help merchants build a roadmap that helps them strike the right balance. It can also be helpful in case a merchant gets into hot water with chargebacks and needs a “defense team” of sorts to help manage communication with merchant and acquiring banks and other parties. An advisor can help you get your facts straight and get on the path back to a secure, protected existence.